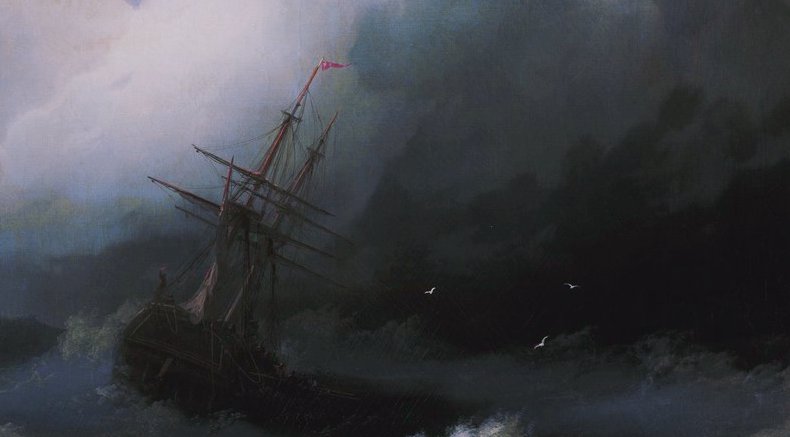 Mist splashed my face as the ship bowed deeply after cresting that last wave.

I hardly noticed the spray as the torrential rain poured down mercilessly on me from a black sky.

My stomach lurched into my throat as we descended violently and pitched back up in the valley riding the wave.
Never in my life had I felt so small; never had I felt so lost.
The ship groaned beneath me, timbers flexing with the strain of each wave.
Coils of rope lashed out and whipped around like serpents as the wind pummeled the loosely unfurled sails.
Shouts and cries reached my ears dully from the rigging above; their voices were drowning on the way down.

I was three pounds lighter and light headed since the storm had surged upon us a lifetime ago.
What sea legs I had earned on this trip were absolutely gone in this tempest, as was breakfast and lunch.
I was no sailor. Fear soaked into my bones deeper than the ocean had.

As I circled the edge of despair that threatened to pull me into the depths of it’s voracious vortex,
a whistle from the stern ushered in a faint cry; I discerned my name on the wind.

I knew my hope and my life lay in my captains hands, and he knew I was a stranger to this voyage.
Determined, I set myself to reach him down the ship’s mid-line.

Sauntering awkwardly to absorb the rolling of the deck, I guided myself down a rope past the foremast.
Eyes blurry from the salt, I could only make out the formless silhouettes of the crew as they frantically responded to the oceans violent moods.

Hands numb as the water washed away what heat I had left, a chill set in and mixed with the dread.
I ached, and dark thoughts crept in whispering to let go and submit to the waves.
A ray of light shot through my crowded mind and elbowed it’s way to my reason,
tantalizing me with visions of home and of my love. I hauled myself forward.

Upon reaching the midship, a hoarse holler hearkened about the air, bringing the crew to a hurried halt.
“Rogue wave!” the cry rang. Amid the torrent of rain assaulting the deck,
I heard the sound of men hurriedly bracing themselves.

The ship groaned too slowly to the side as the colossal hydrous monster barreled towards our vessel.
Wrestling a rope around my waist, I clung to the mizzenmast as hard as I could;
I clung to the vision of our destiny as fervently as I could.

An eerie silence fell, and the ship rose slightly on a cresting wave for a moment-
and with a resounding crack that jarred my teeth and flung the air from my lungs as I compressed against the mast, the wave struck home.

As it washed over the deck, I felt it clawing at my hair and my clothes, fluid hands seducing me to the sea.
The wave passed and I pressed on, still on course for the helm where the captain held his ground.

Voices drifted down from the rigging, men calling to friends, frantic and lost.
The sea is impartial, cold, and heartless. The sea cares not for man nor machine.
A prayer was on my tongue but could not find it’s way past my lips.
Worry edged in. Onward I pressed, sober in my vigil.

Bleak as it was, my lips cracked by the salt water, my feeble hands found firm purchase on the furrowed railing that led to the stern deck.
Warily I wrapped myself to the wood as I worked my way up. Voices bellowed above.
My captain was still there. My life was still sturdy in his hands.

“There you are,” he said calmly as he reached down with a strong arm
to pull me to my feet and place me next to the wheel,
“you look like you’ve seen better days, my friend.”

I nodded bleakly, as he gazed easily from his wizened face deep into my soul.
He nodded curtly as he assessed my wordless condition.

“My friend,” he began, as he grasped the rudder wheel,
“The sea may be fierce, the tempests may be torrid.
The wind may howl, and the water may surge.
This one thing I know, and this one thing has been tried and found true.
We shall steer safely through every storm of life, so long as our heart is right,
our intention fervent, courage steadfast, and our trust fixed on Jesus.”

The sea did surge and the wind did whirl, but my captain continued unabated.
“With our eyes firmly on Him in every storm, we will arrive at our destination.
He is my Captain and the storms of life obey Him
even more readily than the crew of my ship obeys their captain.
He can furl the clouds to the heavens, batten down the rains,
and whistle the waves back to the depths.

His hand is always on the wheel, and
He stands sovereign over your voyage and mine.
Though the wind may e’en continue to blow,
one thing you must surely know:
The tempest is conquered. The tide is in our favor.
My Captain has not failed me yet,
and He will not fail today.

You obeyed my call,
now trust His voice as you trust mine.
He will take you to your destination safely.
You will see your harbour, my friend.
These words are true.”

I looked into his eyes, and my lips found their prayer.
Captain of my captain, You will see me there.


There are more adventures to be had. Report for duty and await further orders.